scurfherder
17/11/2018
Catching up and keeping pace with the late Terry Pratchett's Discworld books since the early nineties resulted in this world has being a constant source of inspiration for well over 20 years.

Aware that Narrativia were casting a watchful eye over the future of the Discworld franchise, I've been cautiously confident that any further instalments will be curated as well as any adaption can be. Which is why I was excited when the long gestating The Watch series was finally greenlit.

With casting yet to be announced I thought I'd have a quick stab at some character concepts using actors I would like to see in the roles. 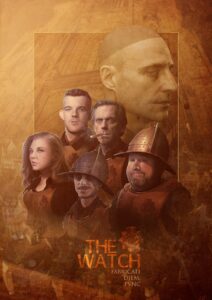 Vimes could be played by a number of people who are working right now. Sean Pertwee or Bean would be great but something about Hugh Laurie's recent, more sinister turns made me think he would suit the role.

Agnua. I think Dormer is probably too busy these days but she has a sort of feline look that I think could translate perfectly to a werewolf.

Mckenzie Crook's turn in the Pirates movies felt very much like Nobbs, working along side a character not dissimilar to Colon,who I think could be played perfectly by John Thompson.

Carrot could have easily be Damion Lewis but felt he was too suave whereas Russel Tovey could bring a more naive charm to the role.

Either Rowan Atkinson playing the Patrician as a stoic sadist, or Mark Strong who seems to exude that dynamic in almost all of his roles.

I went too deep into this rabbit hole and after discussions with numerous friends and colleagues, produced a long cast list for almost all existing Discworld characters, so I may revisit this.

Regardless, I hope so hard the BBC nail this project and deliver the definitive Cinematic Discworld Universe.