Artstation recently hosted a 3 part challenge to produce art for Star Wars, to be judged by a selection of the finest artists from Industrial Light and Magic.

Round 1 - The Moment—Creating Keyframes Challenge: Brief
Create two keyframes  – an emotive still image that tells a cinematic story – within the world of Star Wars Episodes IV – VI. Use only existing Star Wars worlds, vehicles, creatures and characters to create a new story moment.

One place that was mentioned but barely shown (only in some deleted scenes) was the Tosche Station where Luke wanted to acquire some power converters. 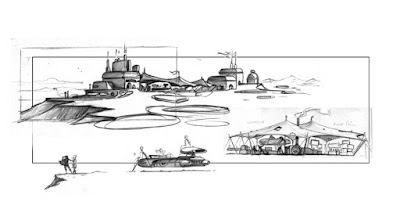 Lucas famously took inspiration from American diners, Rock and Roll, and drag racing. I wanted to create a sort of youth-club version of Jabbas palace, somewhere the 'kids' would go to hang out, mod their rides and race them across the scorching deserts of Tatooine.

On reflection, I spent too long focusing on delivering a McQuarrie-esque style and building up the location rather than focusing on the narrative that was outlined in the brief... cursed by my flustering excitement at the job in hand. 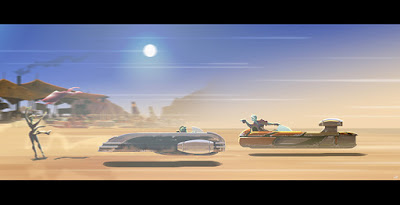 In order to test me further, my graphics card decided to go 'on a break' half way through the first challenge. As a result, the second image was crafted last minute from elements of the final image, and my kids learned some exciting new words that week.