'All of these seven planets could have liquid water - key to life as we know it - under the right atmospheric conditions, but the chances are highest with the three in the habitable zone.'

They're also close enough so that looking up from the surface of one, you could see the other 6 hanging in the sky some the size of our moon.

I don't think the view from the furthest world would look like this as its not one of the ones in the Goldilocks zone, and the sun would be 10 times larger.

However, with an orbit in the region of days, these worlds and their star-field would shift across the sky in minutes and hours rather than the entire night that it takes our moon to move from one horizon to the other. It would be majestic. 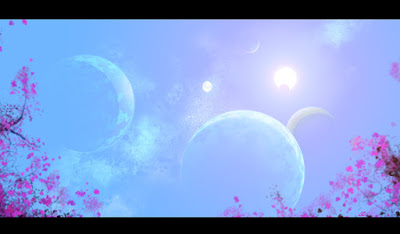 NASA claim that they will be able to detect an atmosphere of oxygen sometime in the next few years using information from Hubble and the James Webb Space Telescope.

Get to it, Science!