I attended a film festival at the Quad in Derby at the weekend where i was lucky enough to see Paddy Considine's seminar, do some networking and see the legendary BRIAN BLESSED in conversation (his name should never be printed in lower case). Conversation turned out to be a misleading term as the interviewer was barely able to sneak in two questions as BRIAN BLESSED erupted a continuous stream of dialogue for almost two hours. Turned up to 11. It was fantastic.

His enthusiasm for all things, but most importantly 'SPAAACE!', was infectious, and after meeting him briefly after the show I felt compelled to put pen to paper and try and recreate his enormous personality. As the man is more or less a living caricature this wasn't too tricky. 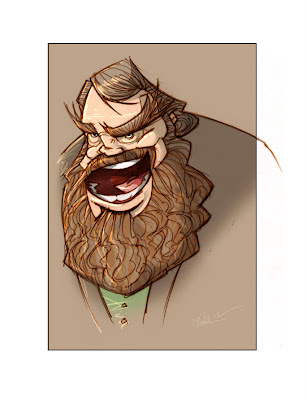