Well its that time of year again where an ancient pagan ritual results in collective days off and an excuse for over indulgence. During this festive period I shall continue sneaking down to my bat-cave, whittling my quill into a sharp point and topping up the ink wells in preparation for a new year of doodling.

I hope everybody makes the most of their Christmas break by fattening up for winter, getting intoxicated, watching plenty of movies and catching up on those backed up games. Hold up... I just described 2012...Here's to 2013! 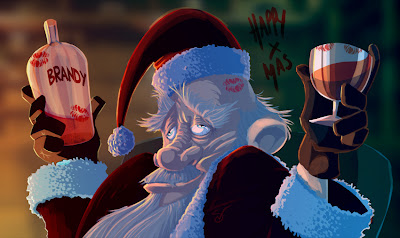 DISCLAIMER
You may have noticed a lack of reference to the end of the world. That's because this myth is based on the scribblings of people from over a thousand years ago, and should be taken as nothing more than a silly story.